A visit to the Atherton Tablelands 9 & 10 August

I left Shannonvale at about 2pm and headed up the Rex Range to Lake Tinaroo. After passing through Mareeba hundreds of Red-Tailed Black-Cockatoo were seen along the side of the road. On the approach road to the lake after passing through Kairi I spotted a Red-backed Kingfisher perched on the power lines - the first I've seen in a long while. At the campsite a quick scout along the waters edge before setting up camp revealed Pacific Black Duck, Black-fronted Dotterel, Little Pied Cormorant, Magpie Goose, Purple Swamphen, Dusky Moorhen, Bush Stone-curlew and Australian Wood Duck.

On a later walk along the forest track I saw White-cheeked Honeyeater, Brush Turkey, Pale-yellow Robin, Spectacled Monarch, Large-billed Scrubwren and Grey Fantail amongst others. After dark a spotlighting walk revealed nothing at all.

It was icy cold when waking up before first light to head off to Hasties Swamp. A quick coffee from the McDonald's drive thru in Atherton soon took the chill out of my bones.

The first thing I saw at Hasties were hundreds of Sarus Crane taking off from their night roost. From the hide I could see Purple Swamphen, Pacific Black Duck, Darter, more Sarus Crane, Little Pied Cormorant, Australian Grebe, Magpie Goose, Grey Teal and Plumed Whistling-duck (There were so many I gave up counting when I reached 500!) 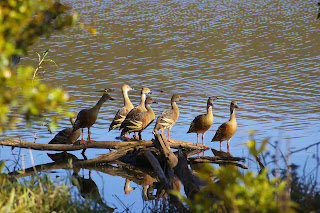 On to Wongabel State Forest. Here all the birds seemed to be in a small flowering tree in the center of the parking area. Golden Whistler, Brown Gerygone, Brown Treecreeper, Grey Fantail, Yellow-breasted Boatbill and Eastern Spinebill. Overhead I saw a Wedge-tailed Eagle and a low flying Grey Goshawk.

On to Mt Hypipamee. Once again the parking area and the first 50m of the walking track proved to have the best birds. In the trees above the picnic table where I was making tea I saw another Grey Goshawk. Also on the grass were Grey-headed Robin, Grey Fantail, Brush Turkey, and Lewen's Honeyeater. Along the track I found Large-billed Scrubwren, Atherton Scrubwren and Brown Gerygone. Alas, the Golden Bowerbird's reported from this site still elude me.

Next I headed for East Evelyn Rd from where I had heard some Satin Bowerbird's had been seen the day before. They were not to be found. Lunch was had at the Miillaa Millaa lookout where I was joined by another birder and two Pied Curawong begging for scraps which it appeared they were carrying off to their nest. A familiar call led us to a nearby patch of scrub where we found several Mountain Thornbill.

Well, time to head home. A quick stop along the road at Lake Mitchell turned up two Brolga. It seems that these birds are slowly being replaced by the Sarus Crane. The total species list for this laid back trip was 93.