A short 1 hour cycle around my local area in Shannonvale this morning turned up 37 species despite the cool drizzly conditions.

A small flock of Metallic Starlings, the first of the season, was spotted at the causeway over the South Mossman River. Three species of cuckoo were sighted - Brush Cuckoo, Fan-tailed Cuckoo and Little Bronze-Cuckoo. Fairy and Tree Martins  were seen in numbers swooping for insects over a recently harvested sugar cane field. Several flocks of Top-knot Pigeons were also observed flying overhead. The thick rainforest edge along the road side yielded Rufous Fan-tail, Double-eyed Fig-parrots, Wompo Fruit-doves, Brown Cuckoo-doves and Fairy Martins amongst others. 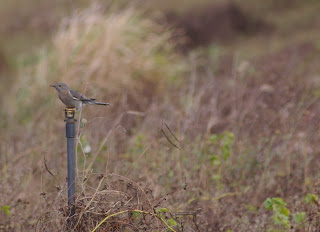 A most satisfying morning before the rain came down!
Posted by Doug at 10:39