On a quick cycle around Shanonvale today I found the first Pied Imperial-pigeons of the season near the South Mossman River causeway. More Metalic Starlings are arriving everyday. Also seen was a Pacific Baza and a Pied Monarch 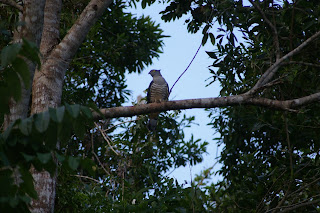 On a later visit to Newell Beach with my birding friend Peter, we found a flock of about 40 Red-tailed Black-cockatoo feeding on the seeds of Beach Almond along the Esplanade. We also saw Silver Gull, Caspian Tern, Crested Tern, Eastern Curlew, Bar-tailed Godwit, and Pied Oysercatcher. Along the mangroves were Large-billed Gerygone, Sacred Kingfisher, Mistletoe Bird and Leaden Flycatcher.
The find of the morning was however a small flock of Lovely Fairywren. The total list of species for the morning was 45.
Posted by Doug at 20:25