My wife and I recently visited Michaelmas Cay with the view to adding the trip to our Wet Tropics birding tour as an extra add on. Whilst there we observed the Brown Booby's in full breeding mode with many nests and chicks. The nests are just a pile of coral,sticks and other marine debris.  The Brown Booby is a common and widespread species but never the less a pleasing bird to watch. 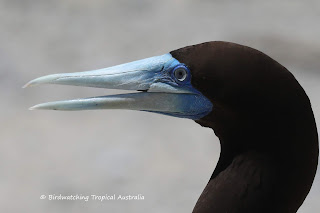 The males have beautifully coloured blue facial skin which fades gradually into the bill. The females have a yellowish facial skin. Both sexes are a deep chocolate brown often appearing black. 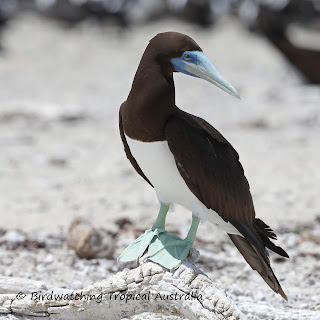 Brown Booby's are strictly marine, usually feeding on inshore waters. Diet is comprised mainly of flying-fish and squid, mullet and anchovies which are usually caught by plunge diving. They also sometimes snatch prey off the surface of the water. 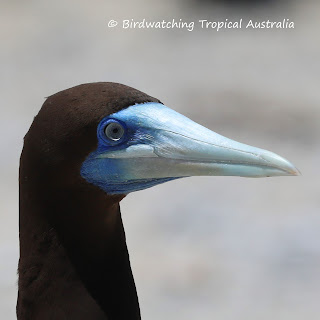 Brown Booby pairs can remain together for several seasons. They perform elaborate greeting ridicules and are also spectacular divers, plunging into the ocean at high speed. 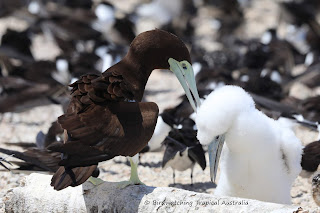 They nest in large colonies. The average clutch consists of two chalky eggs that are placed on the ground in a mound of broken coral,shells and vegetation. One dominant chick is usually raised as it out-competes its sibling for food or just pushes it out of the nest.

We are still working on our new website. We have now gone live so do click on the link and have a look at what we are doing https://mangroverobin.wixsite.com/cairnsbirdingtours