The weather is warming and the humidity is climbing. Pied Imperial-Pigeons and Metallic Starlings have arrived as have the Brown-backed Honeyeaters.

A visit to Lake Mitchell on Tuesday 30th August was most rewarding. We saw the first Glossy Ibis of the season, Horsfield's Bronze-Cuckoo, White-throated Gerygone and White-winged Triller in addition to the usual water birds. Also sighted where 8 Australian Pelican. These birds have been a bit thin on the ground so far this season. A walk along the causeway also rewarded us with a pair of Australian Reed-Warbler and a flock of Double-barred Finch 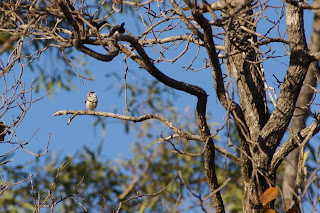 We moved on to Mareeba at about 11am in search of a reported Black Bittern at the Bicentennial Lakes but had no luck finding it. We did however find some Scaly-breasted Lorikeet. Back down to the coast.


An early evening visit to Cooya Beach on the low tide was rewarded by 5 Australian Pied Oystercatcher, Eastern Curlew, a flock of Pied Imperial-Pigeons and an Osprey flying its last catch of the day back to its nest.

While working at Cooya Beach on Friday 2nd I spotted a Banded Lapwing on vacant land at the corner of Cooya Beach Road and Bonnie Doon Road. This bird usually occurs much further South. However, a single bird was also seen last year at about the same time in the same area and also about 2 kilometers away at the Mossman Golf Course.