A Day In Julatten 14 September

After a few cool nights it’s starting to warm up again down at the coast. Julatten is still nice and cool so I set off up the Rex Range at about 8am. First stop was Gerety Park next door to Kingfisher Lodge. A walk around the oval produces some Macleay’s Honeyeater, an over flight of Topknot Pigeon, Grey Headed Whistler, Lemon Bellied Flycatcher, Cattle Egret and Metallic Starlings. Still no sign of nest building from the migrants unless they have chosen a new tree this season. There were a lot of Scaly Breasted Lorikeet about, far outnumbering the Rainbow Breasted Lorikeet. 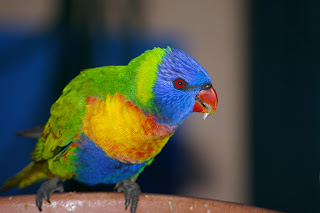 At about 9am I started the drive up Mt Lewis to the clearing.  The road is in great condition this year. With all the rain last dry season the road got very rough. Cyclone Yasi didn’t help either, closing the road for several weeks. At the clearing it was cold enough to put on my warm jacket!  The walk along the track to the dam started off really well. Only a few steps in I spotted the first of 9 Fernwren. There was also an abundance of Grey-Headed Robin, Yellow-throated Scrub Wren, Grey Fantail and Mountain Thorn Bill. I only saw 1 Bridled Honeyeater and not one Chowchilla. Both these birds are usually fairly easy to see along the track. Retracing my steps back to the vehicle, I was confronted by 2 male Eastern Whipbirds having a major altercation in the pathway. The cause, no doubt, was the female perched nearby watching. Their running about and chasing went on for a good few minutes before they noticed me and fled into the undergrowth! A short walk along the road found my Chowchilla happily raking through the leaf litter. 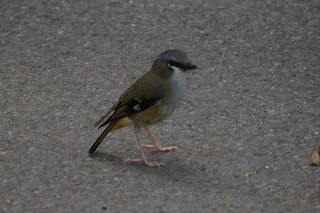 Back down the mountain and on to Mt Malloy. A quick stop at a site on private property near Sides Rd turned up Blue-faced Parrot-finches. These little birds are stunning when seen in full sunlight. Also seen where Pied Monarch, Yellow-breasted Boatbill and Northern Fantail.
On to Mt Malloy. After a quick stop at the caf and my hunger under control after a pie and soft drink, I visited the local Great Bower Bird. He was sitting in his tree purring away above a most impressive bower. He has quite a collection going, white snail shells and stones, a few green items and a lot of pink stuff including a 6cm ruler and pink water pistol! Just up the road a pair of Bush-stone Curlew were doing there “you can’t see me if I stand still” thing next to a flowering Bottle-brush bush covered in Dusky Honeyeaters.
Back in Julatten I visited a few of the dams. The 2 pairs of Cotton Pygmy-goose are still present at McDougal Rd along with Green Pygmy-goose, Pacific Black Duck, Little Pied Cormorant, Little Black Cormorant and Hardhead. No Jacana or Magpie Goose though. Also seen where Red-backed Fairy-wren, Emerald Dove, Torresian Pied-Pigeon, Rainbow Bee-eater, Varied Triller and Mistletoebird amongst others. Full list is at Eremaea Birds http://www.eremaea.com/Lists.aspx?List=95203.
At the bottom of the range on my way home I stopped to watch a large flock of Cattle Egrets interacting with a sugar cane harvester. The birds were lined up along the row of cane being cut waiting for the harvester to pass. They would then dive in and grab any insects disturbed. They did not follow the harvester but waited in position for it to return on the next row. Is this the new breed of steel cattle?
Posted by Doug at 08:29