Saturday 4th August, 5.30 am. Depart Mossman. After driving up the Rex Range road we were met with thick mist blanketing the road between Mt Molloy and Mareeba and had to slow to 80km per hour. The mist persisted all the way to Mt Garnet and eventually cleared just before we reached Forty Mile Scrub. This was our first stop for coffee and a late breakfast. A leisurely walk along the short trail turned up Lewen’s Honeyeater, Great Bowerbird, Australian Figbird and Fairy Gerygone. 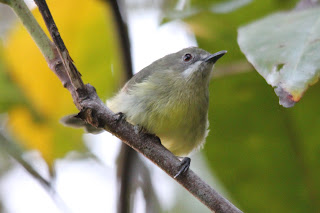 We continued on to The Lynd and made a stop at the Oasis Road House for soft drinks and sausage rolls. From this point several stops along road at dams and gravel pits mostly rewarded us with Australian Wood Duck, Plumed Whistling-duck, Green Pygmy-goose, Pacific Black Duck, Grey Teal, Australian Grebe and various Egrets. We ate a late lunch at the lookout at Porcupine Gorge National Park. The view from the lookout is stunning. From here it was only a short drive to Hughenden. We visited the little museum at the information centre and whetted our appetite for the dinosaurs to come. 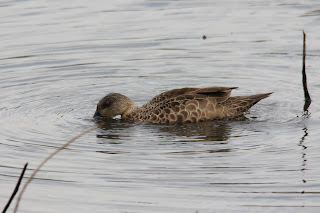 From Hughenden we took the road south to Winton. The windmills and dams along the first stretch of the road provide good birding in an otherwise flat landscape. We saw Spotted Bowerbird and Variegated Fairy-wren. The place was buzzing with Zebra Finch in almost every bush. The dams contained Grey Teal, Hardhead, Australasian Grebe, Australasian Darter and White-necked Heron. We heard Australian Reed-Warbler calling from the reeds and even saw a Black-tailed Native-hen trying to sneak off without being spotted. Raptors were also well represented in the area with Black-shouldered Kite, Black Kite, Wedge-tailed Eagle, Whistling Kite, Nankeen Kestrel and Brown Falcon. Also seen were at least 15 Brolga, Singing Honeyeater, Yellow-throated Miner, Black-faced Woodswallow and Cockatiel. 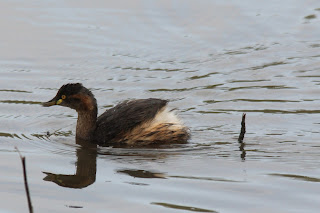 We spent the night at the campsite at Corfield

Sunday 5th August. We were on the road again at 6am headed for the Winton sewerage ponds. We parked near the golf course and surprisingly there were several Crimson Chat on the fairway dodging golf balls. The ponds proved very fruitful for water birds including an Australian Spotted Crake. We also found a Little Eagle flying over the nearby sports fields.

After breakfast and coffee we drove out to the Age of Dinosaurs Centre. The tour of the preparation lab was really interesting and informative. This is the biggest fossil preparation lab in the Southern hemisphere. We watched technicians removing the rock from around fossilised bones and saw how huge chunks of fossilised dinosaur are removed from the ground, wrapped in a protective layer and transported. The second part of the tour at the main centre was also very interesting. We saw the bones of “Banjo” (Australovenator wintonensis), the largest predatory dinosaur ever discovered in Australia. The 800 m walk along the path between the labs and the centre rewarded us with good views of Yellow-rumped and Inland Thornbill. 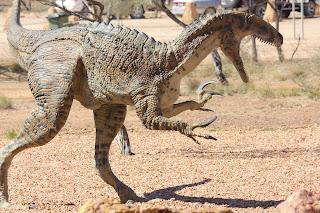 We returned to Winton and then drove out to our campsite at Bough Shed Hole in the Blandensburg National Park. The campsite is well arranged along the edge of the waterhole. A walk along the water’s edge produced Red-browed Pardalote, Striated Pardalote, Grey-crowned Babbler, Rufous Songlark, Common Bronzewing and Black-fronted Dotterel. Just before sunset we chose a quiet spot on the opposite side of the waterhole with the sun behind us. We sat and watched as flocks of Budgerigar, Cockatiel and Red-winged Parrot came in to drink. A lone Willie Wagtail tried very hard to chase off the Budgies but there were just too many of them. 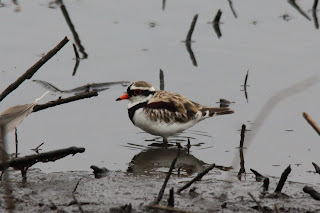 Monday 6th August. We were up at sunrise for a bush bird walk. Moving quietly through the bush we came across two Australian Bustard which we watched for some time. A movement further away caught our eye and we saw an Emu emerge from the undergrowth. We also spent about half an hour watching a flock of Cockatiel investigate a dead tree for nesting hollows.

After breakfast we tackled the 110 km drive south to Lark Quarry Conservation Park. Here we toured the world’s only recorded evidence of a dinosaur stampede. There are over 3300 fossilised footprints on display. After the very interesting tour we walked the 3 km trail around the park in search of Hooded Robin, Grey-headed Honeyeater, White-plumed Honeyeater, Singing Honeyeater and Rufous Whistler.

We headed further south to spend the night at Opalton. We arrived at the bush camp at about 4pm. We spent about an hour before sunset exploring the area around the dam and windmill for good views of Hall’s Babbler and Variegated Fairy-wren.
That evening we joined the local opal miners for a BBQ. They were intrigued that we would travel all this way to look at some birds. One of the older gents helpfully told us where we could find Mallee Ringneck and Spinifex Pigeon the next morning. 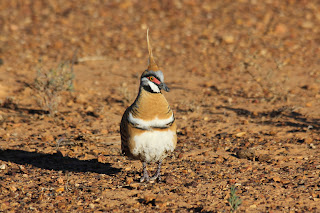 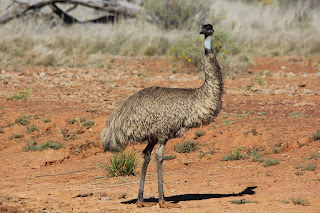 Tuesday 7th August. We were up at first light searching for the Spinifex Pigeons which we found at the top of the runway. Next on the list was the Mallee Ringneck. We found these birds along the creek to the south of the runway. This completed our stay at Opalton and we began our journey back north. We were rewarded with numerous Emu sightings along the roadside between Opalton and Blandensberg National Park. The highlight of the morning though was at a dam and windmill at the roadside. While watching a flock of Zebra Finch in a bush above a water seep we finally found the White-winged Fairy-wrens. We had fantastic views and some good photos were taken. 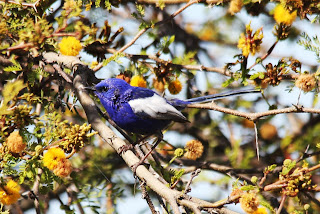 We returned to Porcupine Gorge National Park where we camped for the night. The highlight here was the Wedge-tailed Eagles cruising on the thermals above the gorge. It was very relaxing experience to sit and watch these birds effortless flight.

Wednesday 8th August. The last day of the trip was a straight run back to Mossman with nothing more exciting than a quick stop on the Atherton Tablelands for a quick look at a Golden Bowerbird at its bower.
Posted by Doug at 19:48